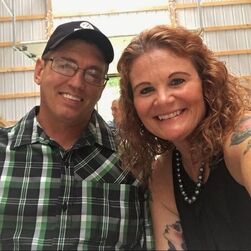 Building Owners David & April Burgett
What if we create a space that is fresh, unique, beautiful and perfectly located in the heart of the historic downtown overlooking our charming business district with its quaint streets made of red bricks and a view of the sky all at the same time?  What if this space could be both industrial and mid-century modern with a twist of historic?

We asked ourselves all of these questions as we signed the closing documents and purchased the "Mason County Bank".  The building was originally built in 1880 as a bank and is a large two story building on the North side of the 200 block of Main Street in Historic Havana Illinois.  The Mason County Bank itself failed during the later years of the Great Depression, and the space was modified to accommodate new uses around 1940.  The original building facade was cut in half and heavy steel beams were put in to separate the top story from the downstairs. The gorgeous columns were taken out on the lower level and replaced with storefront windows and a modern door, and the upstairs was built and divided into office space where doctors, dentists and lawyers kept office hours.  A staircase was built just to the West of the storefront to allow easy access to the upstairs without disturbing the retail business below.

For many years, the building was used in that fashion, until it no longer became feasible to keep offices in the upstairs of downtown buildings.  New office space was being constructed, doctors moved out to the medical facility near the hospital, and no one wanted to climb stairs for appointments.  We estimate in the 1970's the upstairs grew dark and cold and all life ceased to exist in the upper story while the downstairs remained a fully functioning retail business.  After many years, the historic bank windows were vandalized and broken and were boarded up to keep out the elements and so it remained that way until 2019.

We purchased the Mason County Bank building in March of 2019 with a vision.  A ambitious vision!  We began upstairs in the area most devastated by years of neglect, with broken windows, falling ceilings, and no water, heat or electricity. The only thing left was a huge mess and remnants of what was a glorious building filled with character and unique traits.  We had looked at other buildings that were in bad shape and they scared us. We still aren't sure exactly what attracted us to this building, but it was probably a multitude of things about it that called out to us to purchase it and bring it back to life,

In April of 2019 we began the process of demo.  We took it down to the bare walls and ceiling rafters.  We stripped all of the old abandoned wiring out, as well as steam pipes for radiators and what little was left of the plumbing.  We demoed 5 inch thick layers of old plaster off the walls revealing the original red bricks of the 1880 building.  It was filthy dirty, exhausting and we loved every long day of that spring and summer where we could see progress.

We finished demo and had the upstairs ready for the rebuild in September 2019 and were finally able to bring in our carefully selected team of experts.  A plumber, electrician, carpenter, plasterer, HVAC expert, brick masons, and carefully chose windows, lighting, fixtures and every little thing that was going to bring our vision to life.

The upper story features two boutique style, modern yet historic lofts.  Short term rentals for all to see and enjoy in the heart of historic downtown Havana, our home town. We are passionate about providing an amazing, unique experience for visitors of Havana, and we are so excited to welcome you to Havana and the Lofts!

Plan your visit and explore Historic Havana. Enjoy great local restaurants, boutiques, unique shoppes, fun events & activities and the beauty of our natural resources.  Visit the website for information on all Havana and the surrounding region has to offer​.